In the book Can’t Hurt Me, the author David Goggins shares his life story and the struggles that he faced in his life. He shares his traumatic childhood, he faced poverty, prejudice, and physical abuse. He dived deeper into his past and discussed racial and financial issues. Moreover, he shared how his family suffered because of his abusive father. But all of this didn’t stop him from working hard for his future and he transformed himself from a depressed person into U.S. Armed Forces Icon.

Not only this but in his childhood, he was overweight but through self-discipline, he became a record-breaking athlete. He is one of the world’s top endurance athletes and once held the world record for the most pull-ups in 24 hours.

Moreover, he has shared his 40% rule in his book to motivate the readers to reach their full potential and use their capabilities.

Your past doesn’t define your future

According to Goggins, Life’s challenges are similar to weightlifting. The more we are able to raise and overcome, the better.

David Goggins had escaped his abusive father when he was a child, but the trauma he had suffered stayed with him well into his thirties. He was subjected to “toxic stress,” which caused him to perform abysmally in school, to the point that he was barely read. Furthermore, he had a dead-end career in his twenties and began to cope with his feelings through food. He grew to be about 300 pounds in no time.

He grew determined to become a SEAL after seeing a documentary about the Navy SEALs. Even though he was considerably over the 191-pound weight restriction, it didn’t stop him. In just three months, he lost 109 pounds. He decided to stop thinking of himself as a victim of circumstance and instead consider life as “the ultimate training field.”

Push yourself to reach your full potential

If you think that success comes overnight then wake up you are dreaming. Because success requires a lot of hard work, patience, and consistency and this is what the author teaches us in his book.

The author David Goggins is an ultra-endurance athlete as well as a SEAL. He’s run day-long 100-mile races instead of marathons. When people ask him how he managed to accomplish so much, he answers it’s all due to his work ethic. But today’s society thinks that success is a piece of cake. They always want to follow an easy track. However, there is no quick fix when it comes to mastering oneself.

His ability to work hard is the reason he can accomplish so much. Those who claim they don’t have enough time to achieve ambitious life goals, according to Goggins, must be early risers. Goggins also tells us that the “governor” in our minds is the part of our minds that keeps us back in life. It is aware of our limitations and warns us against exceeding them.

Besides this David Goggins highlights a fundamental lesson he learned in Navy SEAL training: that everything in life can be a game of the mind, and that all pain will pass. He claims that many people in Navy SEAL training don’t realize it’s a mental game, and as a result, they resign.

According to the author, most people use only 40% of their capabilities and think that they tried hard for it. But what they don’t know is that success requires 100%.  You still have 60% to give, according to Goggins. It may seem strange, but we humans have a tendency to give up after exerting only 40% of our maximal ability. You can only truly improve after you let go of the mistaken belief that you have put out your best effort.

Pushing above that 40% mark will improve your pain tolerance and allow you to let go of your self-imposed limitations. This is known as the 40% rule. You’ll unlock a higher performance level once you start pushing past the 40% that most of the rest of the world seems to be happy with. You’ll get amazing results if you do it this way.

Who would I recommend the Can’t Hurt Me Summary to?

Can’t Hurt Me summary is recommended to those who live in their past and don’t even try to change their lives. The book will motivate them to start changing their fate and believing in themselves. Moreover, a young lady who is in an abusive relationship and is tolerating all of this just to secure the relationship needs to read this book and start taking a stand for herself. It will empower her and make her strong and independent. 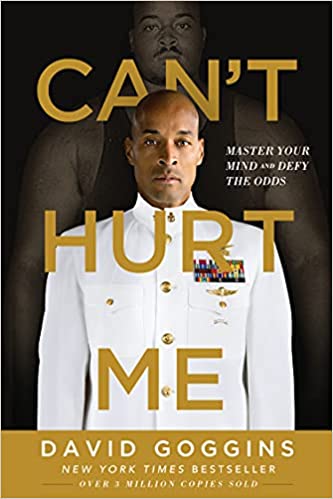