Americans have been living a life of illusions. Chris hedges in the Empire of Illusion: The End of Literacy and the Triumph of Spectacle explains how American society is just decaying over time. The people are lost in a totally another dimension by consumerist products, corporates that exploit them, and positive psychology that is further pushing them into the world of dreams. The Empire of illusion takes different entities of societies like corporate companies, media, politicians, and colleges and links them to the deteriorating condition of society.

Americans are spending years of their lives in front of the television, the media is synthetic and artificial, college is just a step in the life that gets an individual to a job, elites with no knowledge are running the country, women are sexualized and abused and most of the people are in an illusion of being the best. In Empire of Illusion key Points, we will further discuss how America has gone away from being an intellectual and successful empire.

Americans are Becoming Less and Less Interested in Educating Themselves

If you pick out recent surveys, you will be presented with shocking facts and figures about American literacy. For example, a survey reveals that 50 million Americans read at a fifth-grade reading ability, while another 27 million Americans are illiterate. By the age of sixty-five, an American has spent a total of nine years of his life watching television. What is presented on television is another problem. The information we see on television is processed, exaggerated, and glamorized.

Americans have no interest in reading books and many students never read books for the rest of their lives after graduating. The broadcasted shows on television make people more passive and lazier. Reality shows make people believe that they can achieve the American dream by talent only. So many students are dropping out of college to pursue these so-called talents. This move hardly results in any success and only adds to the already increasing rate of illiteracy.

Democracy, Culture, Politics, and Economy: All are Under Threat

In case you were wondering that the author is just another ivy league graduate making speeches and lamenting over the situation in the United States of America; let me clear this for you: the issues he raised are multi-faceted and grounded in reality. Not only the illusion of this empire is increasing illiteracy; but it is also affecting the politics, economy, and culture of the state.

How is it dangerous? Let me ask you something. Who do you trust as a politician? Or who is the person you would like to see in power? your answer might be Joe Biden or Barack Obama or any other name. Now, I would like to further advance my question and ask the reason behind your choice. Most of you would not have any research, facts, or figures to back up your choice. The answers would be vague such as he helps our people. And who told you that? The news, the media, and/or the talk shows.

The synthesized, processed, and biased media edited before it reaches you is affecting your judgment and political choices. If all Americans choose to sit at home watching television for nine years of their lives and choose a leader based on his appearances in the media; the empire is certainly destined to doom. The politicians knowing their people also exploit the media, appear on talk shows, chant empty slogans, make meaningless promises, and smile until they win the elections and forget all about the citizens.

Colleges are Not About Education

Colleges and college presidents spend a lot of time raising money and finding corporations that would fund them either in the form of money or in the form of products and facilities. Many people including America’s famous politicians and artists have been able to get into Andover, Yale, and Harvard through funding and their wealth. There are many instances where you will find a top-notch school giving more opportunities to richer students. For example, the nicest dorms at Berkley are available for those with the highest income source and vice versa.

Such schools are producing adults that have spent their entire lives in a bubble. These people believe that money can get them into anything and enable them to buy everything. They have never encountered any opposition. Their ideas are not mature and resilient. But they are delusional enough to think that they are the most knowledgeable and the most educated. Later in life, these people who have lived their entire lives in riches and have immature concepts and ideas due to lack of exposure govern the lives of the poor and the middle class.

“Ironically, the universities have trained hundreds of thousands of graduates for jobs that soon will not exist. They have trained people to maintain a structure that cannot be maintained.” –Chris Hedges

“In an age of images and entertainment, in an age of instant emotional gratification, we neither seek nor want honesty or reality. Reality is complicated. Reality is boring. We are incapable or unwilling to handle its confusion.” –Chris Hedges

Empire of illusion is a mentally stimulating book with a lot of knowledge and discussion able material. If you are a fan of George Orwell or Audrey Huxley you will love this dystopian perspective.

To Whom I Would Recommend Empire of Illusion 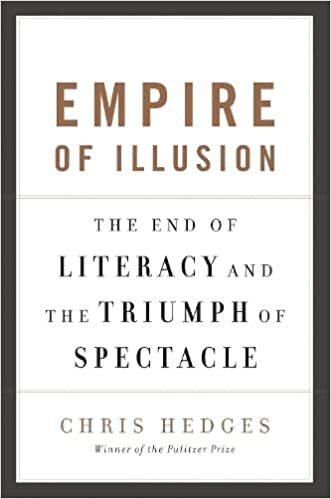