Contents hide
1 Detailed Summary
2 Pimpology Key Points
2.1 The best pimps are those who don’t have to pimp others to get ahead
2.2 A good pimp is like a good boss; he makes his women want to work for him
2.3 Pimps need to have a firm understanding of human psychology if they want to be successful
3 Pimpology Quotes
4 Pimpology Review
5 To whom I would recommend the Pimpology Summary?
6 Buy This Book

Most people live their lives following society’s rules. They go to school, get a job, work hard, and retire. But some people don’t play by the rules. These people are often considered criminals or square because they don’t follow the norms of society. Ken Ivy is one of these people. He was born in the ghetto and rose to become a successful businessman. In his book Pimpology, he shares the secrets that took him from the streets to the executive suites. Ken’s lessons can be applied to any situation where there is an interaction between two or more people. Whether it’s at work, in a relationship, or among friends, somebody has to be on top. That’s the way life works. The strong dominate the weak. It’s nature’s law. And Ken Ivy shows you how to use this law to your advantage in any situation.”

The book covers topics such as how to spot potential customers, how to negotiate terms of service, how to keep your women in line, and how to avoid getting caught by the police. Pimpology is an interesting read for anyone curious about the world of prostitution. However, it should be noted that the book does not condone or glorify violence against women. Rather, it simply provides insight into the mind of a successful pimp.

Pimps have always been a controversial topic. Some people see them as predators, while others see them as successful businessmen. No matter what your opinion is of pimps, there is no denying that they are intelligent and successful people. The best pimps are not the ones who have girls on the street corners selling their bodies. The best pimps are the ones who make millions of dollars off of other peoples’ hard work and intelligence.

These are the business tycoons, power brokers, and politicians who know how to manipulate and take advantage of people. While some people may view these individuals as slimy and unethical, there is no denying that they are successful. Their success comes from their ability to exploit other people’s weaknesses and turn them into profitable ventures. So if you’re looking to get into the pimping game, forget about streetwalkers and look towards the top echelons of society. That’s where the real money is made.

Why are these the best pimps? Because they have what it takes to make it to the top. They have ruthlessness, an unquenchable thirst for power, and a complete lack of empathy. These traits might not sound like positive attributes, but they are essential for success in the world of business. And make no mistake, the business of pimping is very lucrative.

A good pimp is like a good boss; he makes his women want to work for him

A good pimp is like a good boss; he runs his business smoothly and efficiently, making sure his women are happy and making money. His women WANT to work for him because he treats them well and gives them a percentage of their earnings. A good pimp is also street-smart, staying one step ahead of the police and other pimps.

This is because good pimps provide women with what they need and want. Good pimps are also able to keep their women in line without being too forceful. They know how to motivate their women and get the best out of them without resorting to violence or threats. In short, good pimps make good business sense – they invest in their women, and in turn, their women make their money. It’s a win-win situation for everyone involved. A good pimp will also take care of his women by making sure they have a place to stay, food to eat, and clothes to wear. In return for taking care of his women, a good pimp will get respect, loyalty, and obedience from them.

When a pimp is good at what they do, the women under their management will want to work for them. They’ll give their money over willingly, and won’t try to leave or rebel against the pimp. A good pimp is someone who knows how to get the best out of their women and keeps them happy enough that they want to stay and work.

The pimp is the game’s referee, enforcer, and executioner all in one. To be a successful pimp you have to have heart. Pimps with hearts can see beyond the tricks and games that are played on them daily. They understand that it’s not about who has the power, but how you use it. Pimps must also be willing to risk everything for their girls. They must be able to put their egos aside and realize that this isn’t about them, it’s about providing for their women. A man who is truly invested in his women will never let anything happen to them. He will always have their back, no matter what.

A good pimp knows that he can never rest on his laurels. There is always someone out there trying to take what’s yours. So you have to stay sharp and be ready for anything. The day you think you know everything is the day you start losing your grip on your empire. Pimping is a ruthless business, but if done right it can be very rewarding both financially and emotionally. It takes a special kind of person to be a good pimp.

“If people think you are flawed like them, they will try to prove that you are better than you.” -Pimpin’ Ken

“Good pimps have a gift for gab, but smart pimps talk a lot and at the same time don’t say much at all.” -Pimpin’ Ken

Pimpology is a book about the strategies, tactics, and psychology of being a successful pimp. Overall, I found Pimpology to be an interesting read. It’s not something I would recommend to everyone, but if you’re interested in learning more about this lifestyle then this book is good to check out.

To whom I would recommend the Pimpology Summary? 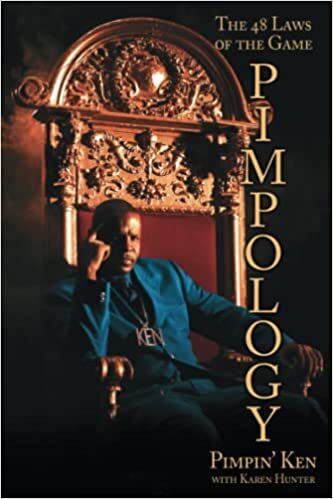