Contents hide
1 Detailed Summary
2 Eleven Rings Key Points
2.1 When times are tough and you can’t count on anyone else, you can always count on your teammates
2.2 When you distribute leadership, you are empowering others to lead with you
2.3 When you see someone struggling, it can be tempting to try to help. But sometimes the best thing you can do is nothing at all
3 Eleven Rings Quotes
4 Eleven Rings Review
5 To whom I would recommend the Eleven Rings summary?
6 Buy This Book

In Eleven Rings: The Soul Of Success, Jackson candidly describes how he: Learned the secrets of mindfulness and team chemistry while playing for the champion New York Knicks in the 1970s. Managed Michael Jordan, the greatest player in the world, and got him to embrace selflessness, even if it meant losing a scoring title. Jackson’s insights are valuable not only to sports fans but also to anyone who wants to create and maintain a winning team culture. As he shows us, successful teams are built on trust, mutual respect, and a commitment to collective success. By internalizing these values, we can all learn to be more effective leaders and team members.

In Jackson’s view, the key to success in team sports is to get everyone working together towards a common goal. He emphasizes the importance of mindfulness or being aware of what is happening in the present moment. This allows players to be more focused and less likely to make mistakes. Jackson also stresses the importance of chemistry among teammates. He believes that it is essential for players to trust and support each other. This leads to a more cohesive and effective team.

When times are tough and you can’t count on anyone else, you can always count on your teammates

When the chips are down and the game is on the line, it’s the love between teammates that Phil says makes all the difference. It’s what propels them to make that extra pass, take that extra shot, or dive for that loose ball. The love between teammates is what drives them to push through fatigue and pain to come out on top. It should come as no surprise then that Phil Jackson is a big proponent of team-building exercises that promote bonding and trust among players. According to Phil, creating a circle of love around your team is the key to unlocking their full potential and turning them into a championship squad.

The warriors who share this love are willing to die for one another. They have absolute faith in one another’s abilities, and they know that no matter what the odds, their team will come out on top. This love is the foundation of any great team, whether it’s a sports team, a military unit, or a business organization. Phil’s advice is to create opportunities for your team members to connect on an emotional level. Get them involved in activities outside of work where they can relax and enjoy one another’s company. The stronger the bond between them, the more likely they are to succeed as a team.

When you distribute leadership, you are empowering others to lead with you

A leader is not born but made. And what separates good leaders from great ones is their willingness to share the spotlight. A great leader knows that they cannot do everything on their own and that by including others in the decision-making process, they can not only delegate tasks but also empower those around them. This doesn’t mean that a leader should abdicate all responsibility – far from it.

When you’re a leader, people will always be looking to you for answers. That can be a lot of pressure, and it’s not always easy to have all the answers. But that’s okay because part of being a great leader is knowing when to ask for help. One way to take some of the pressure off yourself is to distribute leadership among your team. This means allowing others to step up and lead in their ways.

A leader is not simply someone who gives orders and expects them to be followed; a leader is someone who inspires others to achieve great things. And one of the best ways to inspire others is by distributing leadership among your team. When you distribute leadership, you show your team that you trust them to do great work. This trust will motivate them to push themselves harder and achieve even more. Additionally, distributing leadership allows you to tap into the different strengths of each member of your team. By playing to each person’s strengths, you can create a well-rounded and effective team. So if you want to be a great leader, start by distributing leadership among your team. You’ll be amazed at what they are capable of achieving.

When you see someone struggling, it can be tempting to try to help. But sometimes the best thing you can do is nothing at all

In some cases, the best course of action is to do nothing at all. This may seem counterintuitive, but sometimes it is the wisest thing to do. If you don’t have all the information, or if you’re not sure what to do, doing nothing can be the smartest move. There are times when intervening will do more harm than good. If you don’t know what you’re doing, you could make the situation worse. It’s important to be careful and thoughtful before taking any action. In some cases, the best thing you can do is just step back and let things unfold on their own. You might not be able to control the outcome, but sometimes it’s better to stay out of it altogether.

“As a leader, your job is to do everything in your power to create the perfect conditions for success by benching your ego and inspiring your team to play the game the right way. But at some point, you need to let go and turn yourself over to the basketball gods. The soul of success is surrendering to what is.” -Phil Jackson

“That’s why at the start of every season I always encouraged players to focus on the journey rather than the goal. What matters most is playing the game the right way and having the courage to grow, as human beings as well as basketball players. When you do that, the ring takes care of itself.” -Phil Jackson

The lessons in Eleven Rings: The Soul Of Success are very practical and actionable. And they are also inspiring and thought-provoking. The stories in the book are really good too. They bring the lessons to life and make them easier to understand and remember. I especially liked the chapter on “the 11th ring” which is all about putting things into perspective and not becoming too wrapped up in your work or your goals.

To whom I would recommend the Eleven Rings summary? 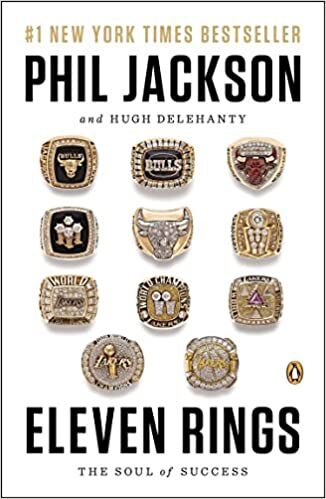