Empty Planet Book negates the claims that the world is growing. The authors John Ibbitson and Darrell Bricker claim that soon the world population will start to lower. It already has.

Now based on this claim let us try to imagine a world with fewer inhabitants all over. How will this affect our lives? If there are fewer people in the world, there will be a lesser number competing for my dream job, and getting into top universities would become easier due to lesser competition. The weather and environment will improve, the resources will stop depleting so quickly, and there will be opportunities for everyone to have a residence and food on their table. In Empty Planet Summary, you will find out why the population is declining, how is a decline in population growth bad for the planet Earth and what can be due to counter this.

Does a decline in population globally mean that we will be happy and satisfied? To find out the answer to this question let us take a look at the Empty Planet Key points that we have jotted down for you below.

Why Will the Population Decline Anyway?

This must have been the question on your mind ever since you started reading the empty planet summary. When we sit in a station waiting for a train, wait in a huge line outside a food truck, apply for a job with thousands of applicants, and get stuck in the traffic on a road; we often ask ourselves why there are so many people on Earth! Well, good news. According to our Canadian authors who are also population experts, the population of our dear planet has started to reduce. It is only a matter of time before it starts to decline at a rapid rate.

Why? One of the main reasons is the infertility trap. You must know about an optimum number. Optimum numbers define a suitable range. Anything below or above this number would not show stability. So, for now, if a country’s fertility rate goes above 2.1, population sizes can grow quickly. If it goes down it is not optimal as well.

What Will Happen If the Population Goes Down?

The lesser population may show many advantages but there are many lesser-known disadvantages of population growth as well. Fewer people mean higher wages but it also means that economic success will slow down. There will be a huge pressure on the fewer people to make the industries grow and to make the businesses run.

Another disadvantage will be the increase in the number of senile people. More people are not being born but those who already exist have to get old. If they are getting older who is going to look after these people? Not to mention if a huge chunk of your population has reached the age of retirement you will have a much smaller number of people to work.

This means that the pressure to run a state, make an economy stable, look after the elderly and make technological progress will only lie on very few people. From harvesting to making money all of this cannot be run properly by a smaller population.

The less evident disadvantages of a decline in population include the decline of culture and the death of languages. As people will start to die but there will be no one to pass down the languages and culture; the languages will die and the traditions will be forgotten. This will make the Earth a place with not so many distinctive and colorful features and trends.

What Can Be Done to Battle the Underpopulation?

First, female reproductive health should be taken into consideration. You must have heard about the famous medicine that was first produced to treat menstrual disorders and was later labeled as a contraceptive. This means that the medicine was to induce infertility and should have been taken as birth control. It was not meant to be taken as a pain relief for menstrual disorders. The women who took these pills only ended up having fertility issues. The world has progressed ever since, but we still need to make effective programs and raise awareness so that the women of this planet can understand their reproductivity and fertility.

Another factor that can be looked into is the amount of money we are spending on healthcare for our aged people. More money should be put down for retirement programs. Old and senile people who have retired need as much care as a government employee does or even more.

“On a farm, a child is an investment—an extra pair of hands to milk the cow, or shoulders to work the fields. But in a city a child is a liability, just another mouth to feed.” ― Darrell Bricker

“Immigrants may soon be hard to come by. Fertility is declining everywhere, even in the poorest countries.” ― Darrell Bricker,

Empty Planet is an interesting read. Every day in the news bulletin we keep hearing about how the growing population is posing a serious threat to the world’s resources and is contributing to climate change and global warming. Empty Planet presents to the readers the other side which is refreshing and knowledgeable.

To Whom I Would Recommend Empty Planet: 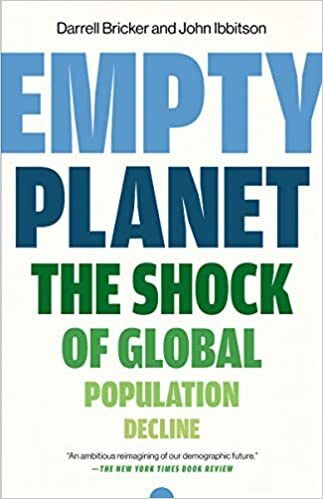