Contents hide
1 Detailed Summary
2 Late Bloomers Book Key Points
2.1 There is an increased pressure on young people to achieve early in life
2.2 Everyone develops at their own pace and eventually catches up to their peers
2.3 Live your life exactly as you please, without societal pressures dictating how fast or slow you should go
3 Late Bloomers Book Quotes
4 Late Bloomers Book Review
5 To whom I would recommend Late Bloomers Summary?
6 Buy This Book

In a society that is always telling us to hurry up and do something with our lives, it can be easy to forget that we are all different. We develop at different rates and sometimes it takes a little longer to figure out what we want to do with our lives.

Early achievement culture is everywhere these days, from the push to get into the best schools to the race to land the most prestigious job. But as Rich Karlgaard points out, this pressure can often do more harm than good. It can lead to imposter syndrome, anxiety, and depression — not to mention burnout. The world around us can be pressuring, always making us feel like we need to achieve something by a certain age or deadline. But it’s important to remember that everyone develops differently and at their own pace. So don’t worry if it takes you a little longer than others to find your path in life. It’s perfectly normal.

The most important thing is to not give up on yourself. When you feel lost, or like you’re stuck in a rut, remember that it’s only temporary. You have the power to change your circumstances and create the life you want for yourself. So don’t be afraid to take your time, and don’t be afraid to ask for help when you need it.

The recent standard of early achievement is negatively affecting young people. The pressure to succeed and make something of themselves as fast as possible is leading to higher levels of anxiety and stress. They think they need to make something of themselves as fast as possible, which can lead to mental health problems, such as depression and anxiety disorders. We must support young people through this time and help them to understand that there is no need to rush; success takes time and should be enjoyed along the way.

This isn’t only harmful to them mentally and physically, but it’s also preventing them from truly enjoying their youth. There’s so much pressure on kids these days to be successful that they’re missing out on a lot of what makes childhood special. So much focus is placed on getting good grades, getting into a good college, and landing a high-paying job that youngsters are forgetting to have fun. Everyone needs to take a step back and remember that life is about more than just working all the time. Kids need time to play, explore, and make mistakes. They need time to be carefree and irresponsible. If we don’t allow them this time, they’ll never learn how to enjoy life or how to deal with adversity.

Some people seem to be born “smart.” They learn quickly, retain information well, and excel at problem-solving. Other people have to work a little harder for their success. But everyone has the same potential for intelligence. The difference lies in how early or late certain areas of the brain develop. The “smart” kids usually have brains that develop a little earlier than average. So they have a head start on learning new things. But it’s important to remember that intelligence is not static. Just because someone isn’t as quick to learn as others doesn’t mean they can’t catch up – and even surpass – their peers later on in life. So don’t give up if you’re not the smartest person in the room!

This is especially true for children, who learn at different rates depending on when their brain develops. For some children, this can be as early as two years old, while for others it may not be until they are five or six. This is why some people are born “smart” and others are not. It’s not always fair, but it’s just the way things are. But it’s important to remember that intelligence is not static. Just because someone isn’t as quick to learn doesn’t mean they can’t catch up – and even surpass – their peers later on in life. Don’t give up if you’re not the smartest person in the room!

It is said that people learn the most during their first three years of life because that is when their brain develops the most. After that, it is just a matter of practicing and refining what they have learned. So if someone falls behind in school, it does not mean that they are doomed to always be behind – with some extra help and support, they can catch up to their peers.

Live your life exactly as you please, without societal pressures dictating how fast or slow you should go

There is no definitive answer to how quickly or slowly someone’s mental abilities progress. Some people seem to learn and grow mentally at a much faster rate than others. This could be due to many factors, such as environment, intelligence, and motivation. It is interesting to note that even within the same person, the rate of mental progression can differ from time to time. For example, a person may learn more quickly when they are younger and their brain is still developing. Alternatively, a person may find it easier to learn new things after they have already learned some basics in the subject matter. In any case, the rate of mental progression varies greatly from individual to individual.

In this Late Bloomers Book: The Power of Patience in a World Obsessed with Early Achievement, author Anders Ericsson suggests that the pressure on kids to achieve academic excellence at an early age is misguided. Instead of pushing them to excel before they’re ready, we should let them develop at their own pace and follow their interests. Steve Jobs, Bill Gates, and Mark Zuckerberg are all examples of highly successful individuals who didn’t find success until later in life.

“To succeed at anything worthwhile in life requires persistence, no matter how gifted, fortunate, or passionate you are. When I interviewed late bloomers for this book, nearly everyone said that once you find your passion and your “pot,” you need to hang in there–you need to persist.” Rich Karlgaard

“In every aspect of our lives, there are many, equally valid ways to reach a positive outcome. There are always many ways to achieve a goal, gain expertise, or find success.” Rich Karlgaard

Late Bloomers Book made me feel like I wasn’t alone in feeling like I didn’t have my life together. It was reassuring to read and I would recommend it to anyone who feels like they are falling behind in life. It’s never too late to bloom. Recommended.

To whom I would recommend Late Bloomers Summary? 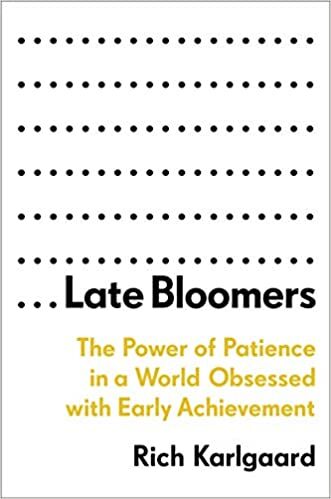