Behavioral economics is a field of study that applies the principles of psychology to economic decision-making. It began as a way to explain why people sometimes make irrational decisions and has since grown into a respected discipline in its own right. Misbehaving book is the story of how behavioral economics came to be. It chronicles the early days of the field when it was first developed by pioneers like Amos Tversky and Daniel Kahneman. These thinkers were interested in understanding why people sometimes make choices that defy rational explanations. They wanted to know what factors influence our decisions, and how we can make better choices in the future. The book also discusses more recent developments in behavioral economics, such as nudging and choice architecture. These concepts have been used by governments and businesses to nudge people towards making better decisions – sometimes with controversial results.

Behavioral economics is a relatively new field that challenges traditional economic theories. This area of study focuses on the role of psychological factors in economic decisions and behavior. Behavioral economists believe that humans are not always rational and that they do not always make choices that are in their best interests. Instead, humans are often influenced by their emotions, experiences, and social norms. Traditional economic theories assume that people are fully rational beings who make decisions based on what is best for them. However, behavioral economics shows that this is not always the case. Humans are often irrational, and their decisions can be influenced by a variety of factors.

Various behavioral biases can lead people to make suboptimal decisions. For example, the sunk cost fallacy leads people to continue investing in something as long as they have invested so much in the past. Even if it is no longer rational to do so. The status quo bias leads people to stick with what they know, even if there are better options available. These biases exist because humans are not fully rational beings. We are often emotional and influenced by our past experiences. This means that we don’t always make the best decisions, even when it comes to something as important as our finances. Fortunately, there is a growing body of research on behavioral economics that is helping us to understand these biases and how to avoid them. By taking into account our human limitations, we can make better decisions that lead to improved financial outcomes.

The efficient market hypothesis (EMH) assumes that investors are rational and that they will always strive to maximize their returns. This means that the prices of assets reflect all available information and that no one can consistently outperform the market. Behavioral economics challenges the EMH by positing that people are not always rational and that their behavior is often shaped by psychological factors. For example, people may be overconfident in their ability to pick stocks or they may follow the herd mentality and invest in what everyone else is investing in. These behavioral biases can lead to sub-optimal decisions and cause markets to be less efficient than the EMH would predict. As a result, there may be opportunities for skilled investors to profit by taking advantage of these biases.

The idea of an irrational individual has been rejected by economists for a long time. This is because they believe that people are rational beings who make decisions based on logic and reason. This is why economists have been increasingly turning to behavioral economics. This takes into account the fact that people are often irrational. Behavioral economics has shown that people are often irrational in their decision-making, and this can have important implications for economic policy.  However, psychologists have often meddled in the field of economics, claiming that people are not always rational and that their emotions can affect their decision-making. For example, If people are more likely to save money when they see others doing so, then policies that encourage social interactions may be more effective at promoting saving than those that don’t.

It is used to explain many economic anomalies, such as why people save too little for retirement and make other suboptimal decisions. Behavioral economics has also had an impact on public policy. For example, it is now common for government policies to take into account the fact that people are not always rational in their decision-making.

“Psychologists refer to a “just noticeable difference” as JND. If you want to impress an academic psychologist add that term to your cocktail party banter.” Richard Thales

“Economists have their way of doing things and will resist change. If for no other reason, than that they invested years building their corners of this edifice.” Richard Thales

While it is difficult to deny that “Misbehaving” has a certain element of both power and history, the book does much more than simply recount those elements. The story delves deeply into the motivations and personalities of the individuals involved in what author Thaler calls “the greatest intellectual revolution of our time.” As such, it provides readers with a unique and insightful look at how and why people behave the way they do. Recommended.

To whom I would the Misbehaving Book Summary? 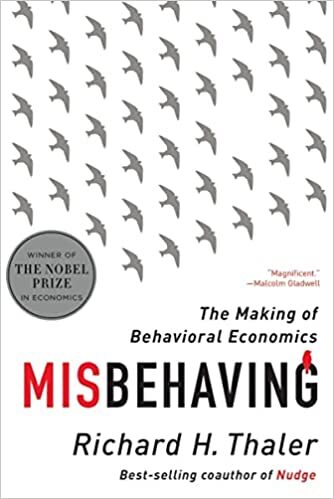