Author: The Art of Choosing

The Art of Choosing presents us with the scientific basis of decisions. Why do we behave the way we do? Why do we prefer one thing over the other? What influences us to side with one person over the other? Why sometimes we try to aim for uniqueness and why decision making is healthy. All of these questions are answered in the Art of choosing.

Now let us dig in and talk about choices, opportunities, and well. Decisions!

The Art of Choosing Key Points

All of our decisions are not made out of rationality. As Sheena Iyengar describes, decisions are either automated or reflective. For example, you wake up every day and your first reflex might be heading to the bathroom and brushing your teeth. When a place is on fire, our first reflex is getting ourselves out of there safely. Such decisions are reflexive we take them without thinking much.

On the other hand, rational decisions are the ones that we take with thorough thinking, after weighing the pros and cons and Dos and don’ts. For example, the decision of choosing a college major and the institute you want to attend will come from deep and rational thinking. You know that such decisions can improve or decrease the quality of your life and that is why they cannot be made quickly like the former ones.

All of us want to feel special. This need of feeling different and more important than others, often makes us take decisions that we usually would not.  For example, you go to a restaurant that you love and you are about to order your all-time favorite dish. Instead of doing that you end up ordering something different. Later, you might ask yourself why you went for that dish instead of your favorite one. The answer is simple; your decision was based on the urge to be unique and feel different than you usually do.

We sometimes aim for uniqueness but as the author argues we do not go for something unique. For example, if you are habitual of driving a hybrid car you are unlikely to go totally out of context and end up buying a regular car. In a similar way, if you like to listen to music and you usually listen to jazz-rock you would not just change your taste instantly and start listening to rap. Humans make decisions to be unique but only to a comfortable extent.

Our Brain Factors Everything that Goes Around us

So many things happen in our daily lives. Yet we do not remember all of them. Take the example of a person who wakes up and goes to work daily. When he wakes up, his family members might be doing different tasks, the news might be broadcasted on television, and his neighbors may be chatting, as he leaves for work, several people pass him who are doing different things. As he reaches his office there are several people. Someone might have a cold, someone might be leaving for another floor and someone might pass him by. Among all these people and circumstances,  this person would have only noticed a few. Those things that have called for his attention.

Mr. A was a middle-aged guy who lived in a blue house because blue was the only color in the world. He ate cereal because that was the only meal in the universe. Wearing straight pants and white tee shirts were the only options. He did not take a cab. Walking to his office was the only option available. Why? Because everyone in the world did so. There were no choices. He had to live with the particular built-in life. Sounds depressing right?

Our lives would be like the one Mr. A lived if we had not had any choice or options. Scientists say that even having choices in life has a positive and healthy effect on us. So be grateful for all the opportunities you get to grab and the decisions you get to make! Having a choice means you have to make a decision and decision-making dies not to have to be hard and troublesome. Think of it as a blessing.

The Art of Choosing Quotes

“We are sculptors finding ourselves in the evolution of choosing, not in the results of choice.” –Sheena Iyengar

“What you see determines how you interpret the world, which in turn influences what you expect of the world and how you expect the story of your life to unfold.” –Sheena Iyengar

The Art of Choosing Review

The Art of Choosing is an interesting read. It will give you a deep insight into decision-making and choices. If you want to know why you do what you do grab this book as soon as possible.

To Whom I Would Recommend the Art of Choosing 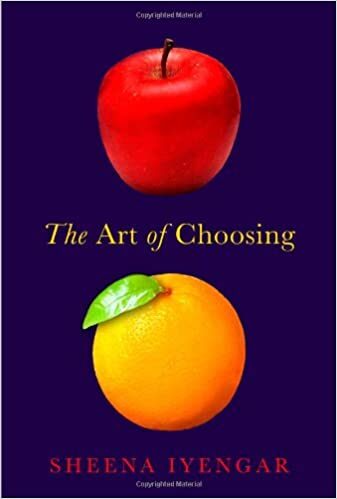