A product is made. It has some new characteristics that stand out. A person saw that the new product is different and he buys it. He goes out and sits in a gathering of ten people. Six of these ten men look at how the product stands out and want to buy the product as well. Now more and more people want to wear the product. Do all of them see the product for its distinctive features? No. But they all want them because it is a trend to have that product. The product has spread like a viral infection, and just like the common cold in winter, everyone in society is adorning it. Congratulations, the product has reached the ‘tipping point.

The point where all of the common masses have the product, and there is no stopping the rest of the people from buying it. The product does not need any marketing strategies. It will sell itself. Just like products, ideas and thoughts have tipping points too. Something just does not go viral out of the blue. Little things combine and produce an effect that causes a massive explosion, and that thing goes viral. And if you want to know how you can make something you own to reach the tipping point, keep reading as the key point has all the secrets for you. Just a recipe of a few ingredients, including reaching out to successful people, following influencers with many social backgrounds, focusing on one-factor marketing, connecting with natural salesmen, and looking at the minute details can do wonders.

Just like products, ideas are also pushed towards their tipping points by famous and influential people. For example, George Orwell, author, and promoter of democratic socialism, pushed the idea of big brother to the tipping point. Big brother an idea that is used even today to describe the power of states over their people.

Choose Someone with Diverse Clout

Now we know that famous people can make ideas and products spread like wildfire in society. But still, there are many famous people. And if you want to achieve the maximum result, you will want to go to the right person. It is your idea, product, and investment at stake. The author, in this case, advises you to choose someone with a diverse social network or rather social networks. People who take ideas to a tipping point know multiple people. Not just from their fields, cities, and background but people from all over the world. In short, a person who knows multiple, diverse and unique social circles can help your product more than someone else.

Make the Idea Sensational for it to Stick

Many people mistake not picking up one feature of their idea and product. If this is the case, the potential customers cannot know what is new or different by looking at the product. On the other hand, some people start by advertising all of the important aspects and features, which is also a mistake.

For an idea to reach the tipping point, you need to find one aspect and make it stick. One distinctive idea that makes your product stand out the most can do more than mention several good ideas. So, the next time you are advertising for your product, ask yourself which feature will appeal to the audience most, which feature is the most effective, which feature brings the most ease to the customers, and which feature is the newest one as compared to the features of the products that are already in the market. Choose the one feature that ticks most of these boxes.

“If you want to bring a fundamental change in people’s beliefs and behavior…you need to create a community around them, where those new beliefs can be practiced, expressed, and nurtured.” ― Malcolm Gladwell

“Look at the world around you. It may seem like an immovable, implacable place. It is not. It can be tipped with the slightest push—in just the right place.” ― Malcolm Gladwell

The tipping point is a great read to understand the social aspect of how things go viral. Why do certain products and ideas influence humans more than others? The book was a bit dull sometimes for me, but that does not negate the fact that it has some of the best advice on making things go viral.

To Whom I Would Recommend the Tipping Point Summary? 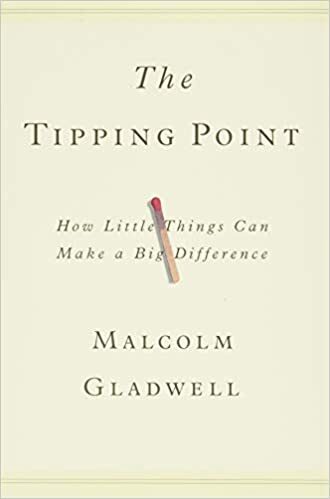