The Unplugged Alpha starts by stating that men have been lied to their entire lives by society and that these lies have emasculated them. It goes on to say that the only way for men to become true Alpha Males is to “unplug” from society and its lies, and start living by their natural tendencies. It is incredibly important for men to remember that they are just as worthy of love, attention, and respect as women are. They need to put their own needs first, and not be afraid to ask for what they want or need from their partners. Only when men start valuing themselves as much as they value women will we achieve true equality.

This is incredibly damaging to men’s mental and emotional health, as it leads them to constantly put women on a pedestal and view them as objects rather than human beings. It also causes them to miss out on developing their own identities and living their own lives. Men need to learn that they don’t have to sacrifice their well-being to be good people. They can and should focus on their dreams and goals, and pursue healthy relationships with women that are based on mutual respect and equality.

In today’s society, you’re taught to put women first. You’re told that it’s the right thing to do and that it’ll make you a better person. But the truth is, this mindset disempowers you and sets you up for failure in life and dating. When you focus on putting women first, you take away your power. You become a people pleaser who is always chasing after someone else’s approval. And as a result, you never truly get what you want in life. You end up settling for less than what you deserve because you don’t believe that you’re worthy of anything more. And when it comes to dating, this mindset will sabotage your success every time.

Women can sense when they are being put first, and it repels them instead of attracting them. They want a man who is confident and secure enough within himself to know that he doesn’t need her validation or approval to feel good about himself. So if you want to succeed in life, stop putting women first.

The media tells you that you have to be a “nice guy” and put women first, but that’s not how things work in the real world. If you’re always putting women first, you’re disempowering yourself and making it harder to succeed in life. That’s because nice guys finish last – both in terms of dating and success in general. Instead of being a nice guy, you need to be assertive and go after what you want. Only then will you be able to achieve your goals and get the girl of your dreams.

It’s your responsibility to set, and always enforce, the boundaries that are meaningful to you

You’re responsible for setting the boundaries in your relationship. By setting these boundaries, you are telling the other person what is acceptable and what is not. If someone crosses one of your boundaries, it is up to you to enforce it. This can be done by simply speaking up and saying that what they did was not okay, or by ending the relationship altogether. This means that it’s up to you to decide what is and isn’t acceptable behavior from your partner. If they do something that you don’t like, it’s important to communicate this to them directly. A man who is focused on his goals and ambitions will not tolerate a woman who threatens his progress.

You always have the option to walk away from a woman who isn’t respecting your time, energy, or emotions. There is no need for her permission or approval to live a meaningful life. You can be happy and fulfilled without a partner – but first, you must get rid of any toxic relationships that are weighing you down. If you want a healthy, thriving relationship then you need to take responsibility for setting the tone and boundaries. It’s up to you to create the kind of relationship that you want, and no one else can do it for you.

So if you find yourself in a situation where your needs aren’t being met, or worse, where you’re being drained by someone else’s toxicity, don’t hesitate to walk away. Your happiness is too important to sacrifice for anyone or anything less than what you deserve.

If you don’t put yourself first, you will never become the alpha male that you are meant to be

So many guys out there are neglecting themselves and it’s holding them back from becoming the best version of themselves. If you want to be successful in life, you need to put yourself first and make sure that you’re taking care of your own needs. Once you do that, you’ll be able to take care of others and achieve success in all areas of your life. To become an alpha male, you need to have a strong frame.

This means that you need to be confident and in control at all times. You can’t let emotions or other people’s opinions dictate how you live your life. You need to be the one who is in charge and making the decisions. This can be a challenge at first, but if you stick with it, eventually it will become second nature. When you become an alpha male, you’ll find that life is much more enjoyable. You’ll have more confidence, women will be attracted to you, and people will generally respect you more. If you want to enjoy life to the fullest, then becoming an alpha male is the way to go.

“A woman is interested in a man’s future and there’s a reason why men are interested in her past. Because he wants purity and he wants innocence. That’s why women are considered beauty objects.” -Richard Cooper

“A beta is on the other end of the spectrum. He is not her first choice; he is an accessory to her life, a utility, a handyman, and, in many cases, she’ll also treat him like an ATM.” -Richard Cooper

The unplugged alpha is a good starting point for anyone who wants to better understand how men think, and how the dating world works. It’s also a valuable resource for those who want to improve their own dating game. The book covers a lot of ground, from an overview of basic concepts like “game” and “the red pill,” to more specific advice on flirting, online dating, and even dealing with breakups.

To whom I would recommend The Unplugged Alpha Summary? 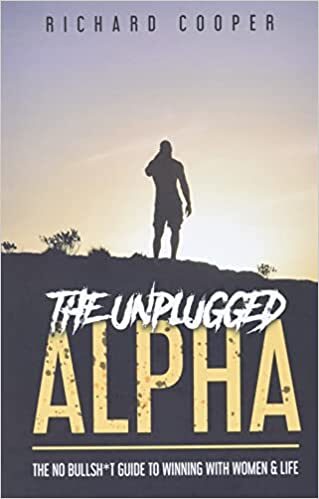