Interestingly, not all psychopaths are violent criminals. Many psychopaths lead what appear to be normal lives. They may be successful businessmen or women, politicians, lawyers, or doctors. They’re often charming and charismatic, making them very good at manipulation and deception. And because they lack empathy and don’t feel guilt or remorse, they’re also very good at lying. So what makes a psychopath tick?

When we think about psychopaths in these terms, it’s easy to see why they strike such fear into the hearts of people. We can’t help but wonder what goes on in their heads, and how they could be so cruel. But not all psychopaths are killers or criminals. Many of them live normal lives. You might even know one and not even realize it.

Scientists believe that several factors contribute to psychopathy, including genetic disposition and brain damage. Psychopaths typically have lower-than-average activity in the parts of the brain that control emotions like fear and anxiety. This may explain why they’re not afraid of breaking the law or engaging in risky behavior. Additionally, some research suggests that childhood trauma can play a role in the development of psychopathy.

The Wisdom of Psychopaths Key Points

Psychopathy is not desirable in large amounts, it can be helpful in small doses

Psychopaths are often successful because they are willing to take risks that others are not. They are also able to stay calm under pressure and do not feel fear like most people do. This can be an advantage in many situations. For example, psychopaths make great leaders during times of crisis. They can make decisions quickly and without emotion. This can be beneficial when time is of the essence and there is no room for error. However, it is important to note that psychopathy should not be encouraged. It is a disorder that can have negative consequences if it goes unchecked. But, in small doses, it can be helpful for both individuals and society as a whole.

Some people view psychopathy as a mental disorder. But, it can also be seen as a personality trait. And, like all personality traits, it exists on a continuum. That is, some people have more of it than others. People with psychopathy are often successful. They’re good at charming and manipulating people. They’re also good at taking risks and they’re not afraid of Failure. All of these things can help them achieve their goals.  However, psychopathy can also be detrimental. Psychopaths are often manipulative and lack empathy. This can make them harmful to others. Overall, psychopathy is a mixed bag. It can be helpful or harmful depending on the person and the situation. But, psychopathy isn’t always good for society. People with high levels of psychopathy are more likely to commit crimes. They’re also more likely to be dishonest and to take advantage of others. So, while “psychopathy in small doses” can be helpful, too much of it is harmful.

Different people will have different mixes of psychopathic traits. Some may be high in all the traits while others may only be high in a few. However, all psychopaths share a common lack of empathy and remorse. They also tend to be impulsive, manipulative, and grandiose. The specific mix of traits someone has will determine how they manifest their psychopathy.  For example, someone who is high in impulsivity but low in anxiety may act out in aggressive or risky ways. Someone high in both impulsivity and anxiety may become a compulsive liar or cheat. And someone high in all facets of psychopathy may become a successful con artist or sociopathic killer.

You could, for example, be a high-functioning psychopath. This means that you have most of the symptoms of psychopathy but can still function in society. You may be successful in your career and have no criminal record, but you may also lack empathy, be manipulative and callous, and have a sense of grandiosity. Or you could be a low-functioning psychopath. This means that you have more severe symptoms that make it hard for you to function in society. You may have a criminal record, problems with substance abuse, and difficulty holding down a job. You may also be violent and impulsive. The important thing to remember is that psychopathy is a spectrum disorder. That means there is no “one size fits all” when it comes to diagnosis or treatment.

While psychopaths are often associated with criminal and antisocial behavior, they can also be surprisingly helpful

Psychopaths are notoriously manipulative and often use their charm to take advantage of people. However, the author suggests that they may also be more likely to help someone in a crisis. Dutton found that people with psychopathic tendencies were more likely than others to both victimize someone and save them from victimization. In other words, they were just as likely to be a hero as they were to be a villain. He believes that this may be because psychopaths are less inhibited and more impulsive than others. They’re also less worried about social norms and more concerned with immediate gratification. This can lead them to make decisions without thinking about the consequences, which can sometimes result in heroic acts. So if you find yourself in a crisis, don’t discount the help of a psychopathic individual – they may just surprise you.

The Wisdom of Psychopaths Quotes

“Ruthlessness, charm, focus, mental toughness, fearlessness, mindfulness (living in the moment), and action. Who wouldn’t, at certain points in their lives, benefit from kicking one or two of them up a notch? What was important was being able to turn them back down.” -Kevin Dutton

The Wisdom of Psychopaths Review

The Wisdom of Psychopaths has given me a lot to think about. It’s one of those books that forces you to examine your own beliefs and values. Dutton does an excellent job of making his case for why we should rethink our notions of mental illness and psychopathy. I found the book extremely interesting and thought-provoking, even if I didn’t always agree with the author. I highly recommend it, even if it isn’t perfect.

To whom I would recommend The Wisdom Of Psychopaths summary? 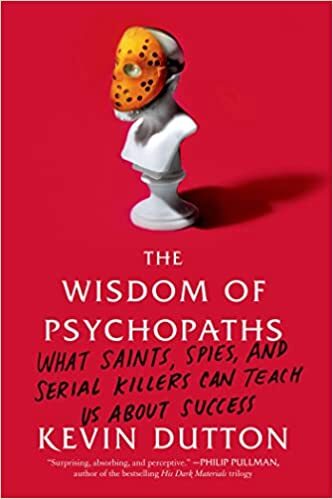