Ressler was an FBI profiler who worked on some of the most high-profile cases in American history. His work led him to believe that there was a connection between all serial killers and that they shared similar psychology. This belief eventually led Ressler to develop his own theory of what he called the “monster myth.”

Whoever Fights Monsters is fascinating in its insights into the mind of serial killers, as well as the process of tracking them down. Ressler’s methods were often unorthodox, but they ultimately led to the capture of some of the most notorious killers in history, including John Wayne Gacy and Ted Bundy. On one hand, it is fascinating to see how law enforcement officials were able to develop such sophisticated techniques for tracking down killers.

On the other hand, it is chilling to realize how little we still understand about the motivations of these criminals. It is clear that Ressler and his colleagues did their best to try to understand and catch these killers, but in many ways, they were working in the dark. We have come a long way since then, but there is still much we do not know about why people kill.

A person does not just wake up one day and decide to become a serial killer. It is a process that takes time, often years, to develop

The development of psychosis, which can lead to serial murder, takes time. The individual often experiences a gradual decline in mental health, and may exhibit warning signs for years before the onset of full-blown psychosis. Even then, it may take months or years for the individual to become a serial killer. In some cases, the progression from mental illness to a murderous spree is rapid; in others, it is more gradual. There is no one “profile” of a serial killer, but many experts believe that there are certain personality traits or disorders that may predispose an individual to violence.

Many people think that all it takes is for someone to be “born evil” in order to commit such atrocities, but this simply isn’t the case. It’s important to remember that not all serial killers are alike; each has its own unique motivations and reasons for killing. For some, it may be years before they finally act on their impulses; for others, it could happen much sooner. There is no one answer as to why someone becomes a serial killer, but there are certain factors that can contribute to the development of such psychopathic tendencies.

Psychopaths are also master manipulators. They are experts at lying and deception

Psychopaths are among the most manipulative and dangerous criminals. They are experts at playing mind games and instilling fear in their victims. In this case, the psychopath was successful in terrorizing his interviewer. This is just one example of the many ways that psychopaths can manipulate and control those around them.

Psychopaths are experts at playing mind games. They enjoy toying with their victims, making them feel scared and vulnerable. In some cases, they may even kill just for the thrill of it. One of the most common games psychopaths play is called the “fear game.” This is when they try to make their victim feel scared and helpless. They might do this by making threatening gestures, telling chilling stories, or even attacking them physically. Ressler’s story is a chilling reminder of the dangers of dealing with psychopaths. They are master manipulators who will stop at nothing to get what they want.  If you find yourself in the presence of a psychopath, it’s important to stay calm and try not to show any fear. These individuals feed off of the negative emotions of others, so giving them what they want will only make things worse. Instead, try to keep your cool and remember that you’re in control – not them.

Most serial killers have a “type” of person that they target in their victims. This victim becomes part of the killer’s fantasy and drives them to commit more murders. In some cases, the killer will even take on the persona of their victim in order to feel closer to them. This obsession with fantasies is what sets serial killers apart from other types of criminals. They are not simply driven by a desire to kill, but by a need to bring their dark fantasies to life. This is what drives serial killers to continue killing. They are in search of the ultimate high, the one that will finally fulfill their dark fantasies. But it is never enough. The more they kill, the more their fantasy demands, and so the cycle continues. Serial killers are not motivated by money or power, as some people think. It is all about the fantasy for them. And as long as they have this driving force within them, they will keep on killing.

Fantasy life for a serial killer might include being all-powerful, getting away with the crime, being sexually gratified by the act, or feeling a sense of control. The problem is that in real life, they are not able to live out these fantasies without breaking the law. Most often, serial killers fantasize about what they will do next. This can be an obsession that leads them to plan and carry out murders. In some cases, it may even lead to torture or mutilation of the victim’s body.

“There is no such thing as the person who at age thirty-five suddenly changes from being perfectly normal and erupts into totally evil, disruptive, murderous behavior. The behaviors that are precursors to murder have been present and developing in that person’s life for a long, long time- since childhood.” -Robert K. Ressler

“Manson is a great talker and his favorite subject is himself.” -Robert K. Ressler

The book is about the author’s experience as an FBI profiler. It gives an inside look at how these types of crimes are solved and how the mind of a serial killer works. The book is insightful and eye-opening, while still remaining entertaining.  It is a well-written and fascinating read that will leave you wanting more. Recommended.

To whom I would recommend the Whoever Fights Monsters Summary? 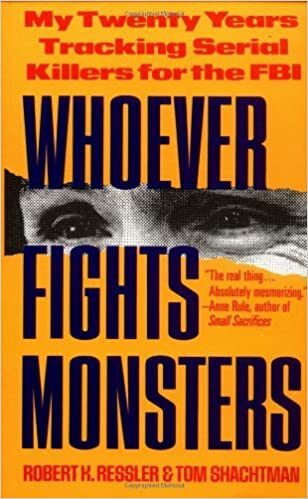