Controversy has been a fact of life since the beginning. From Adam and Eve in the Bible to today, there’s never been a person, place, or thing that’s not been criticized by someone. So why do some people get angry and upset when they hear opposing viewpoints? Whether it’s on Facebook posts, blogs, or the comment sections of news sites, when people see content they disagree with, they can become defensive. They start to yell, scream and insult the author.

We’ve probably all been in a situation where we were so shocked by someone’s behavior that we lost our cool. There was a time when we thought the human race was alone in the universe. Then we encountered one of the most important questions: Are we alone?

Well, turns out, we’re not. And that has generated some real problems.

Our long history of encountering other cultures has made us very good at seeing differences and valuing them, but it’s also built up a whole lot of baggage around what’s different.

Why Are We Yelling? Key Points

Cognitive dissonance is the mental stress or discomfort experienced by holding two or more contradictory beliefs, ideas, and/or values at the same time. In a state of dissonance, people may sometimes feel “dissonant distress,” which typically results in an alteration of belief, attitude, opinion, or behavior to eliminate the dissonance and restore balance.

When you see or hear an opposing view, the voice in your head tells you different things about it, some of which can open up possibilities. If you hear that a new product is bad, you may doubt yourself, psychologically speaking. “I don’t know if I like it. Maybe I don’t have good taste.” If you hear that a product is great, you might think “Wow. I didn’t realize that.” or “Wow. That’s amazing!” And if you’re a person who likes to be right all the time, these contrary views will cause problems for you and make you feel uncomfortable.

One of the biggest reasons why people don’t ask questions is because they are afraid of what the other person might say. When we disagree, we put our pride on the line and for some of us – we’re scared of what their response might be. But if you ask questions instead, you can reduce that uncertainty. The trick is to ask questions about the experiences they’ve had since they reached their conclusion.

Because curiosity is a superpower. It is the most important ability you can hone as a parent, teacher, or leader. Its value is without question, but it won’t get you very far if you don’t know how to direct it. Or worse, if it’s not directed at all. Questions are the golden ticket to making it through disagreements productively. I mean, sure, you can steamroll your way through an argument, but there’s a reason why arguing that way is such a big no-no. And if you want to actually get through to someone (and not just bolster your own arguments), you need to ask good questions.

When someone disagrees with you, you typically have three options: attack, defend, or exit. Attack means arguing back. Defending means trying to shut them down with logical fallacies or dismissing their concerns. When you use these strategies, you’ll probably feel frustrated and the other person will probably escalate the conflict—which often results in hurt feelings and animosity.

It’s a good model for how to invest your time in an argument, because usually when you think you’re being attacked or interrogated, you involuntarily react defensively.

The solution goes beyond simply banning disagreement. If you’re having a conversation with someone and you want to convince them of your point of view, you can’t just silence their opposition; you need to engage with them. While this takes a lot more effort, it’s the only way to make sure your own biases don’t bias the outcome.

This is how I approach tough topics like gun control or euthanasia. While I write on a variety of topics, these are two I have a strong opinion on. But instead of yelling at people who disagree with me, I’m constantly finding ways to let them into the conversation. In both cases, this usually means writing about my personal experience with the issue at hand, even if that means bringing negative emotions up again. And that’s OK. This is how we get better. And it’s how we improve society. If we never let the troglodytes have a say, only to prove how wrong they are, then we’re cheating the rest of us out of a better future.

Review and debate are important ways for people to understand more about their own beliefs, as well as their blind spots. The argument that you should never hear anything out of their mouths isn’t just wrong — it’s dangerous. Sure, the conversation might go nowhere, but sometimes starting with something different can lead to new ways of opening up our minds.

You might have an easy time applying the lessons so far with everyday issues, like what to eat. But hotter topics like gun control or euthanasia can be tough. It’s pretty difficult to even begin to entertain some of the abhorrent viewpoints people have out there. But these are exactly the kinds of discussions that need more exposure. Sometimes you need to listen in order to learn and understand — even if you do it in the most uncomfortable of situations.

Why Are We Yelling? Quotes

“Conflict, when we cultivate it, is like a blackberry bush that is accepted and integrated into the garden. It’s watered, fed, and brought to health so it can play its part.” –Buster Benson

“Socrates  taught that the true goal of dialogue was to reach moments of aporia—not to decide or become certain or be proven right but to realize that you don’t actually know what you’re talking about.” –Buster Benso

Why Are We Yelling? Review

I love this book because it doesn’t just speak to arguments or disagreements. It speaks to EVERYONE about issues that affect us all. The author is honest, moving, and thought-provoking. The writing will make you laugh, cry and think about your own biases and beliefs. The book has an easy-to-read style, which makes it easy for beginners like myself to understand. Recommended.

To Whom I would recommend Why Are We Yelling? Summary? 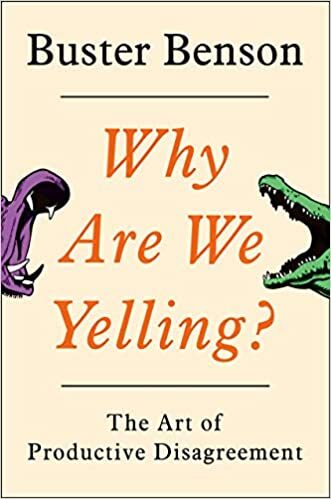