Contents hide
1 Detailed Summary
2 Win Bigly Key Points
2.1 It’s a common human tendency to think that we make decisions based on logic and reasoning
2.2 The key to Trump’s success was his willingness to say absolutely anything
2.3 Political leaders also use strategic ambiguity when they want to appeal to as many people as possible without offending anyone
3 Win Bigly Quotes
4 Win Bigly Review
5 To whom I would recommend the Win Bigly Summary?
6 Buy This Book

Win Bigly is not just a book about Donald Trump. It’s a book about how humans can be persuaded. Scott Adams takes a deep dive into the psychology of persuasion and how Trump used it to his advantage in the 2016 election. Adams breaks down Trump’s tactics step-by-step, explaining how he was able to win over voters by appealing to their emotions and playing on their fears.

The book discusses how Trump’s use of certain persuasion techniques, such as pre-suasion and emotional contagion, helped him to win the election. It also provides insights into how we can all use these techniques to be more effective persuaders in our own lives. Whether you love or hate Donald Trump, there’s no denying that he is a master persuader. In his new book, Win Bigly, Scott Adams analyses Trump’s success in the 2016 election and provides insights into how we can all use persuasion techniques to be more effective in our lives. Trump made extensive use of pre-suasion during his campaign, which is a technique that involves priming people to be receptive to your message before you even start speaking. For example, he would often talk about making America great again before he even started talking about specific policies. This helped to create an emotional connection with his audience and make them more receptive to his message.

Humans are creatures of habit and the vast majority of our decisions are made based on emotion, not logic. We like to think that we make rational decisions, but the truth is that most of us base our choices on how we feel in the moment. It’s only after we’ve made a decision that we start to look for reasons to justify it. This is called post-rationalization and it allows us to convince ourselves that our choices were logical all along. Of course, some decisions are truly rational. But even then, our emotions often play a role in the final choice.

The sunk cost fallacy is a good example of this. We often continue investing in something (time, money, emotion) because we have already invested so much. We tell ourselves it would be irrational to quit now – even though that may be the best decision. Furthermore, we tend to overvalue what we have and undervalue what we don’t. This is called the endowment effect and it leads us to make sub-optimal decisions. For example, you may hold on to a losing stock longer than you should because you can’t stand the thought of “losing” it (even though selling at a loss may be the best thing to do). These biases lead us to make all sorts of poor decisions – from everyday choices like what to eat for lunch, to life-altering ones like whether or not to get married or take a new job. The good news is that once you are aware of these biases, you can make an effort to overcome them and make more rational decisions.

Trump understood that the key to dominating the media is to say crazy stuff. And he did just that. With over-the-top and over-the-top, sensationalistic claims, Trump was all over the media. The media came to depend on Trump to sell and make news. And all his political opponents virtually disappeared. In today’s society, it seems that the louder and more outrageous you are, the more attention you will receive. This is especially true when it comes to the media. Trump realized this and used it to his advantage. His outlandish statements kept him in the spotlight and ensured that he received constant coverage. In doing so, he effectively silenced his opponents and dominated the media landscape.

To keep the public’s attention, Trump had to constantly say crazy things. Crazy stuff like “I will be the greatest president that God ever created “I will make America great again” or “You’re fired!” was all headlines because of Trump. His opponents didn’t stand a chance against him in the court of public opinion because they couldn’t get any attention. The more outrageous the claim, the more coverage he got. And it didn’t matter if what he said was true or not. The only thing that mattered was that he was always in the news. Trump’s opponents soon learned that they could not compete with him when it came to media attention. They disappeared from the headlines and were effectively marginalized. In the end, it was Trump who dominated the media, and as a result, he dominated the political conversation.

To be successful, communicators need to learn how to use strategic ambiguity. When done correctly, it allows the message recipient to draw conclusions, which are usually more favorable than if the communicator had been more direct. Strategic ambiguity is an important tool for anyone who wants to persuade or influence others. It can help you get buy-in from stakeholders, build support for your ideas, and sell your products or services. But like any communication tool, it needs to be used skillfully and with care. Used poorly, it can backfire and create confusion or resentment.

A good example of this is when a politician says they’re “for the people.” What does that mean? It’s intentionally vague, and each person can interpret it how they want. In this way, the politician can gain support from many different groups of people. Some argue that strategic ambiguity is manipulative, but as long as all parties involved are aware of the tactic, then there’s no harm done. It can be an effective way to get everyone on the same page without ruffling any feathers. It is a way to make people feel good about agreeing with you, without having to be too specific about your position. This technique can be useful in politics, advertising, and other situations where you want people to agree with you, but don’t want to commit to anything specific.

“We humans like to think we are creatures of reason. We aren’t. The reality is that we make our decisions first and rationalize them later…Your illusion of being a rational person is supported by the fact that sometimes you do act rationally.” -Scott Adams

“I have no reason to believe humans evolved with the capability to understand their reality. That capability was not important to survival. When it comes to evolution, any illusion that keeps us alive long enough to procreate is good enough.” -Scott Adams

I think the author is on to something when he talks about Trump’s ability to appeal to people’s emotions, but I don’t think it’s the whole story. Yes, Trump is a master persuader, but I don’t think that’s all there is to it. Ultimately, I found Win Bigly to be an interesting read, but not particularly convincing.

To whom I would recommend the Win Bigly Summary? 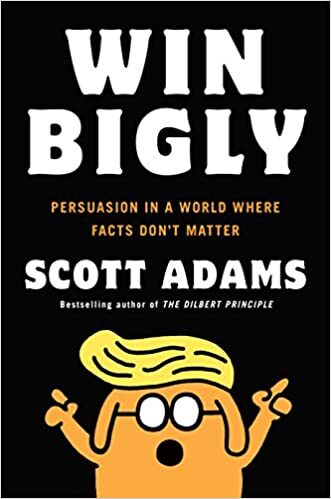